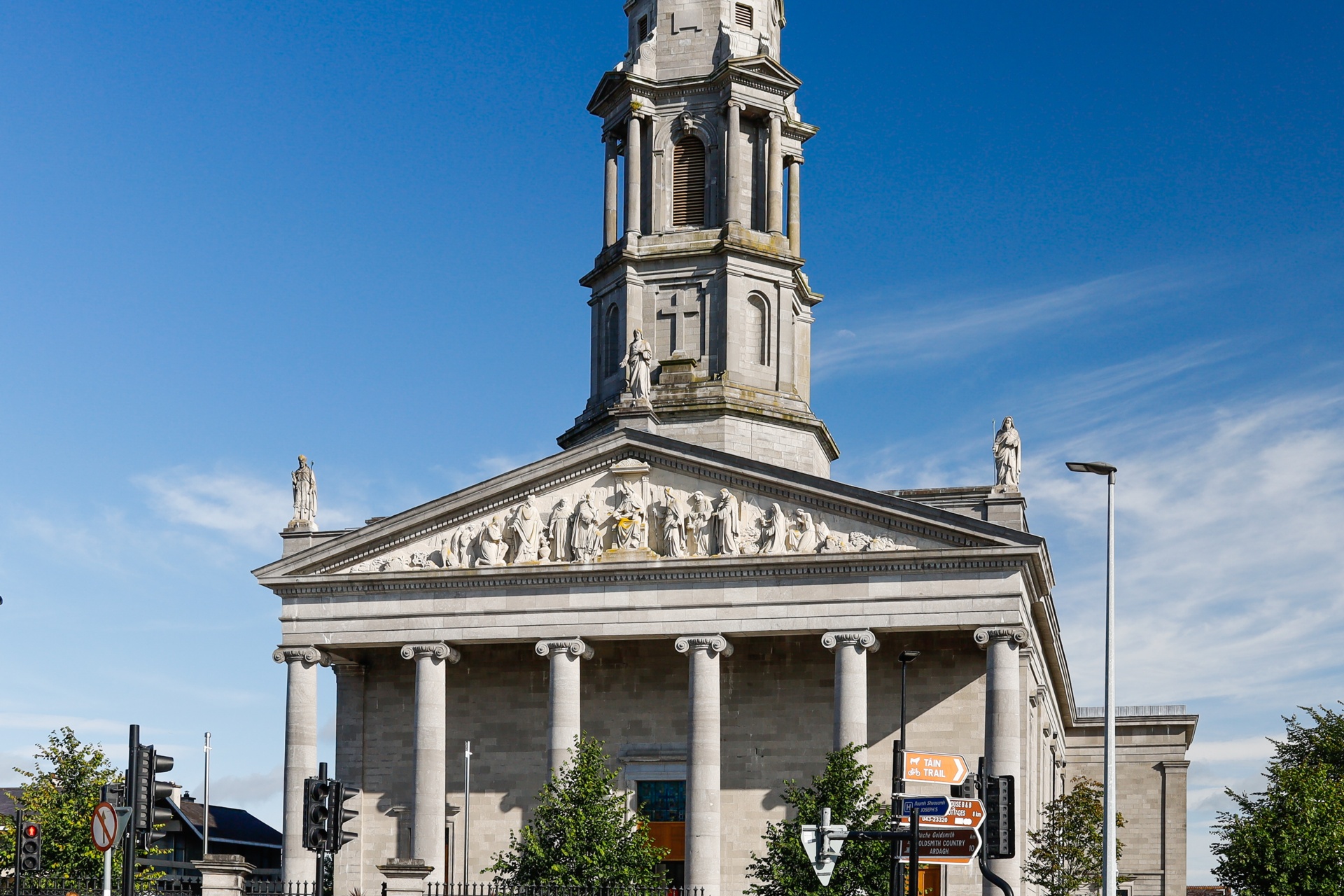 This week we will take a look at this beautiful cathedral.

Some of our parishioners visited the Cathedral with Fr. Coffey after restoration works were completed in Christmas 2014.  It had been destroyed by fire on Christmas Day 2009

The construction of St Mel’s Cathedral was begun in 19 May 1840 with the laying of the foundation stone by Bishop William O’Higgins was the instigator of the project.  The stone was taken from the ancient church of St Mel in Ardagh. Also present was  the architect John Benjamin Keane. Over 40,000 people attended. It was halted in 1847 because of the famine. After the death of Bishop O’Higgins in 1853 Bishop Kilduff continued with the work.  On the 24th of September 1856 the cathedral was dedicated to St Mel and opened for worship.

In 1863 architect redesigned the campanile with its tiers of Corinthian pilliars and the high alter of Carrara marble was put in place by Bishop Woodlock. The portico was completed by George Ashlin architect in 1893. The statuary on the portico represents the consecration of St Mel as bishop by St Patrick by sculptor George Smyth. The solemn consecration took place on 19th May 1893 53 years after the laying of the foundation stone.

Christmas Eve 2009 fire broke out in St Mel’s Cathedral. Christmas morning brought a sorry sight to the parishioners of Longford. Their cathedral was a ruin. Almost everything was destroyed. The limestone pillars holding up the main roof were seriously damaged by the fire and the water used to extinguish the fire. People were in shock, it seemed an impossible task. The museum in the cathedral with many artefacts was also destroyed.

Strangely, the Holy Family picture in the northern transept was not damaged and the hosts in the tabernacle were intact. The painting was oil on cotton based canvas and it should have been impossible to survive such a fire. It is of Italian origin but artist unknown.

But Bishop Colm O’Reilly told the people that the building would be restored. The estimate was €30 million. It took five years to restore the building including the 28 limestone columns each side of the main aisle supporting the roof. It was financed mainly from the insurance cover and was reopened for Christmas 2014