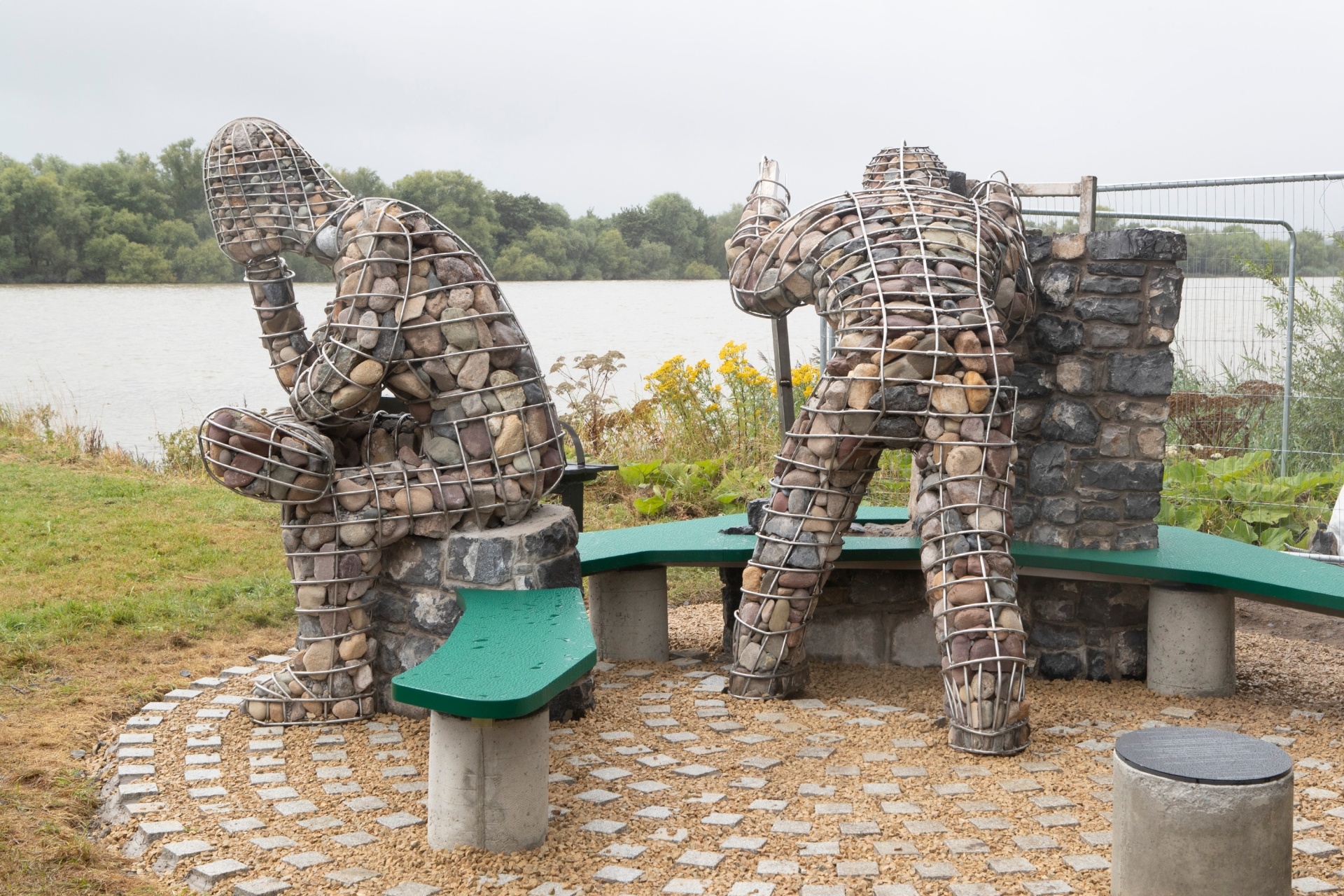 A public bench and sculpture in memory of two Limerick-born brothers and priests Aengus and Jack Finucane was unveiled at Barrington's Pier last week.

Located on the banks of the River Shannon, the large timber bench shape mimics the flow of the Shannon and was erected to honour their work with Concern.

The piece which was subject to opposition from some local residents was funded by contributions from a number of Limerick businesses, supporters of the Finucanes and Concern and received the backing of Limerick City and County Council.

The Finucane's were young priests during the famine in Biafra in 1968, when John and Kay O’Loughlin-Kennedy formed Concern Africa – now Concern Worldwide – in response to the crisis. It’s from there that their long history with Concern started, with both brothers working to help the world’s poorest people in a whole host of countries. Fr Aengus eventually went on to lead Concern during the 1980’s and early 1990’s.

The Finucane brothers are giants of men, what they achieved was extraordinary. While the brothers had received the freedom of the City of Limerick, we wanted a lasting and visible tribute to remind this and future generations of the power of positive change, change that was made possible through the generous support of the people of Limerick and across every county in Ireland,” said Dominic MacSorley, CEO of Concern Worldwide.

The unveiling on the eve of World Humanitarian Day (Aug 19th) reflected on the legacy of the Finucane brothers and the plight of communities around the world who today are deeply affected by conflict, climate change and

Speaking at the launch, Mayor of the City and County of Limerick Cllr Francis Foley said, The Finucane Brothers, were granted the Freedom of Limerick in recognition of their tireless work in Africa and Asia. Their work in developing countries is unsurpassed and their legacies will live on as these countries and their peoples continue to develop, become wealthier and carve out their place on the world stage.

Frs Jack and Aengus have been with Concern since it was founded in 1968, a name which is still synonymous with care-giving, emergency response relief and compassion. This new monument to the brothers captures their spirit of looking outward to other places while having roots and a sense of place in Limerick.

It is a wonderful addition to our city and to the quiet area at Barrington’s Pier.

Funding for the memorial is completely separate to donations for Concern's overseas work.

The memorial features a large timber bench whose shape mimics the flow of the Shannon, along with six foot tall, one and a half life-sized steel sculptures, filled with river stone capturing the spirt of both men; Aengus standing with arms out, pushing against the walls of poverty, hunger and injustice while Jack is represented sitting, with knee on ankle, portraying his reflective personality, a problem solver yet equally as passionate and driven.

The commemorative bench entitled, ‘Giants of Men’ was designed and crafted by Tom Roche from Rhode, Co. Offaly and Knut Klimmek based in Dublin, who won the commission for the piece following a public tender.

Both Tom and Knut are furniture makers. The bench was created by Knut from a ground-breaking construction material manufactured from forest thinning and kindly donated by Medite-Smartply – a Coillte company based in Waterford, while Tom created the stainless steel metal frames that form the shapes for the river-stone sculptures.

The project was a challenge from the start. It is not often that one gets the opportunity to get involved with a project like this, which saw our creativity and technical know-how pushed to the limit. The figures owe their existence to the single minded determination that Tom Roche brings to bear on any project he gets involved in.

We are delighted to have been involved in the project and humbled by the confidence that Concern showed in us by commissioning the memorial, said Knut.

The memorial took over two years to complete. The sculptures were made at Tom’s workshop at his home in Rhode, Co. Offaly while the bench was hand-carved by Knut at his studio in Dublin.

The memorial in size and scale was replicated at Tom’s home, with the sculptures starting life as chipboard figures which then saw Tom bending the stainless steel by hand around the chipboard to get the correct shapes.

These curved shapes were then removed from the mannequins and welded together around an inner skeleton to create the outer frames of the figures, which were then filled with river washed stones.